The top 5 best places to visit in Mallorca 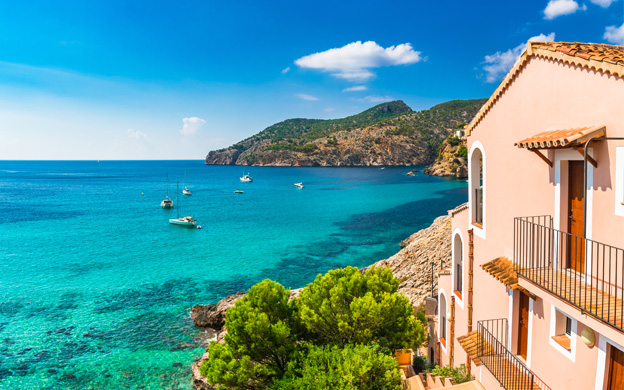 If you are looking for the top 5 landmarks in Mallorca we have some great suggestions for you to visit.  There is far more to Mallorca than on the first impression. Taking time to explore the islands unique features is certainly a rewarding experience, and we have a guide to some of the best sightseeing spots on offer.

THE TRAIN FROM PALMA TO SÓLLER

This vintage wooden train runs between Palma and Soller and crosses the Sierra de Alfàbia mountain range with a series of tunnels, bridges, viaducts, and winding bends.  It was constructed in 1911 and originally built to transport fruit down to Palma. At just under 17 miles long the journey takes about an hour from start to finish and is an ideal trip out.  Spectacular views of the mountain range and a terrific atmosphere are ensured. A return journey is easily done on the same day but tickets cannot be bought in advance.

Every year thousands of people flock to the pilgrimage site of Lluc to worship the statue of the Black Madonna in the 17th basilica. The religious and spiritual site is the most important holy sitetoday. Its central location, in a valley at an altitude of 525m in the middle of the Tramuntana Mountains, is breathtaking – a place which is closely associated with nature, tranquillity, relaxation and prayer.

The journey here by car takes you around many hairpin bends with stunning views. Along the way you will also clearly see, with the terrace formations here, how Mallorcan farmers created space for olive, almond and citrus tree cultivation. Look closely and you will probably also see the odd mountain goat climbing around the slopes.

Botanicactus is one of Europe's largest botanical gardens, with bamboo and palm trees and dozens of varieties of cactus.  In total there are over 400 different variations of plant and more than 10,000 cactus plant.


These gardens were opened in 1989 in Ses Salines because of the scarcity of rains in the area. The centre of the garden is full of cacti, surrounded by Mediterranean species. There is also a selection of tropical plants with a lake.

The cacti flourish in the dry and sunny climate and the landscape has been specifically designed to protect the plants, with the creation of the artificial lake and raised terraces protecting the plants from the wind.

Located just off the south-western coast of Mallorca, Sa Dragonera is separated from the main island by a small channel. Six kilometres long and crowned by an ancient watchtower, Sa Dragonera takes its name from its shape, said to resemble a dragon.

You can access the Island daily with ferries departing from Sant Elm or Port Andratx. The island has a small natural harbour in Cala Lladó. From the pier, there are several excursions to explore the island.

The Park is famous for its stunning, unique flora and fauna. The area is particularly well known for its native wall lizard population, a creature that cannot be found anywhere in the world. This region also boasts the largest Eleonora’s falcon population in the Balearic Islands and a wide range of sea-faring birds, such as the Balearic shearwater.

Sa Dragonera is also home to five species of bat, some of which are migrant. The Park includes the surrounding waters, so when you head to Sa Dragonera, you can check out the Posidonia oceanic prairies, which possess a wide range of marine species and coral communities. Sa Dragonera’s flora is just as impressive as its fauna, with 361 plant species, 18 of which are native to the Balearics.

THE CATHEDRAL OF PALMA DE MALLORCA

Even if you haven't visited Mallorca you will no doubt know the magnificent Catalonian Gothic cathedral that is the landmark of the city.

Overlooking the harbour, it lies in the oldest part of the city and is dedicated to San Sebastian, Palma's patron saint.

The son of Jaume I of Aragon began construction in the early 1300s in thanks for his survival during a great storm when sailing to Mallorca with his army. On New Year's Day 1230 the foundation stone was laid on the site of where the main mosque originally stood, so it faces Mecca rather than Jerusalem.

Along with the usual saintly relics (one is said to be a piece of the True Cross), it is also the home of the Royal Chapel which contains the tombs of Kings James II and James III of Mallorca